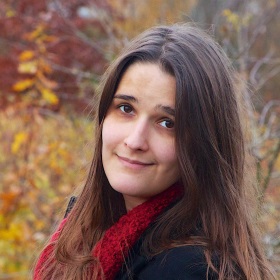 Charlotte Strong is a British fantasy writer, represented by the John Jarrold Literary Agency. When not writing, she spends her time rock climbing and filling the house with half-finished craft projects to annoy her husband.

For an interesting conversation opener, try: "Oh, you work in a library. It must be nice to sit around and read books all day..."

Kingdom of the Fallen

The island of Ferinsfarne offers freedom from past pain, its inhabitants giving up all memories of their former lives. In exchange for this peace, they now forge the weapons of war, used to fight for the land they chose to forget.

Madelaine refuses to believe that she gave up her old life willingly and is determined to tear down the blocks that hold her memories at bay. Meanwhile, Cade fights to keep his blocks from crumbling, tormented by dreams of battle, fury and a bloody sword. If either are discovered they will be taken to the fortress, to either return with their minds fully wiped, or never be heard from again.

In the distant past, a doorway was opened between the human world and the Otherlands. Through this breach came the shape-shifting sohlmeru, whose illusions and strange magics allow them to spirit away human women and use them as surrogates to carry their offspring. The gods gifted humanity with magic, to fight this new enemy, and the Kingdom of Theiros formed the Queen’s Hawks, an organisation dedicated to driving the sohlmeru back.

But now, greed and politics threaten to destroy the Hawks from within, even as a new and far more human enemy lurks beyond Theiros’s eastern border. In another corner of the kingdom, a young woman is dragged off to the Otherlands on the day of her wedding, and her would-be rescuers will discover that humanity’s relationship with the sohlmeru has never been as straightforward as the priests would have them believe.

The Empress of Eslaya is struggling to maintain control of her unruly nobles and fractured court. Her neighbours in the strictly religious and caste-structured empire of Toaku are seeking to harness the forbidden art of healing magic, against the wishes of their priests. Meanwhile, the mysterious Governor of the lawless isle of Rilmir has plots of his own, which could shake the foundations of both great empires and plunge them all into the horror of war.

The threads entwine, the lies unravel and the fates of many will be caught up in the chaos.

Fairy Tales and Other Adaptations